“I think what no one in this room wants to admit is that Trump has helped all of you.”- Michelle Wolf.

I often find myself thinking as to why American politics is so much more exciting than our own? Are they more polarised than us- a country where we see logic in killing each other over dairy animals? It was only recently that I gained some insight into this question.

The White House Correspondents Dinner is an annual event held in Washington for journalists. Each year a comedian is brought in to roast the attendees and the current administration. This year Michelle Wolf was called on and she created an uproar, both of laughter and of the controversial type.

“I’m 32 years old, which is an odd age. Ten years too young to host this event and 20 years too old for Roy Moore.”

This year, instead of roasting Trump for 20 minutes at a stretch, she dedicated more time at the journalists present. Her language was crude, vulgar and she did not pull her punches. She blamed them for creating Trump and then profiting off of him. They rarely go after important issues and focus on the juicy pieces like his affairs. She ended her speech by saying “ by the way, Flint still doesn’t have clean water”.

But the controversy here isn’t for the Flint issue, but a joke she made about the looks of a female Trump official.

But this is plain newspeak.  Those reporters had an ego and she tore right through it. They there have lost sight of the important issues.  They polarise themselves, commanding the undivided attention of one half of the populace. They prioritise their stories like they’re a paparazzi website. The irony here is that even on this issue people ignored Flint and focussed on the minor details. Wolf laid out a trap and they fell right into it.

But she wasn’t wrong. They did create Trump. Their extensive coverage of him is what GOT him elected and now they’re just hungry for ANY Trump scandal. Most people now get their news online and Trump is the only thing that gets them their clicks. Only the sensationalist sells.

We’re no better in that category either. News channels have been reduced to fear mongering havens when all violent sentiments coalesce and argue over prime-time debates. Even Sridevi’s death managed to get sensationalised in a downright comedic manner. 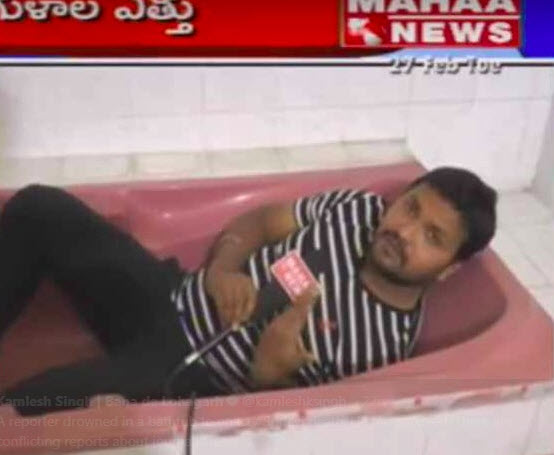 What can we do to change this system? Nothing. We’re inquisitive creatures by nature. A link with a suspenseful headlines can grab your attention. I often catch myself clicking on clickbait-y sounding link with the full knowledge of what the author was trying to do to lure me in. Perhaps there is nothing we can do. Perhaps there is a lot. Maybe in the final draft of this piece I’ll name this something deceitful. If I DO name this article in that way, it would be even more ironic if it got tons of views. It is a flawed system and the first step to changing it is to acknowledge and understand its existence.

I am a journalist who’s passionate about climate change and climate justice. For me that’s the most important story I can write about and contribute to fixing. As a journalist, my way of going about it is to educate people about this existential threat that’s bogged down by skepticism, denialism, lack of comprehension of scope, and general apathy.

I also write about a lot of other things, like social justice, protests, pop culture, lifestyle, and esports. Albeit these stories won’t be as frequent as they depend on what I find fascinating and meaningful to write about at the moment.

This website is both my portfolio and my space to share interesting information- about myself or climate change. Any time I’m commission by a publication (fingers crossed) I’ll crosspost it here for all my audience to see.

This site may even turn into an actual blog from time to time. If I have any personal revelations that my audience can learn from, I may share it here

✨Birthday themed Zhaoyi Zhong Appreciation post✨
Haven't posted in a long time so here's some food from last week(s)
To the person who treats me like a baby even today,
"Okay so now pretend you're in Oceans 11. You won the heist, but lost the woman your dreams and are contemplating that"- excellent directing by @dhruvi.gif 😂
Finally managed to get my hands on a copy of @artefactmag this year.
✨Zhaoyi Zhong appreciation post✨

A.L. Ashkenaz [DEFINITELY NOT CLICKBAIT] YOU WON’T BELIEVE WHAT THIS COMEDIAN SAID ABOUT TRUMP
%d bloggers like this: